Radon is a radioactive element that is known to cause cancer. It can lurk in your home without you knowing—it has no taste, smell, or color. Detecting radon and taking steps to lower radon levels is important to preventing serious damage to your family’s health later on. Call SafeAir today to schedule radon testing and inspection.

SPEAK WITH AN INSPECTOR

Radon, or Rn, is a chemical element that is produced during the process through which uranium gradually decays into lead. It occurs naturally beneath the ground in soil, rock sediments, and water, and gradually rises to the surface and makes its way into their air. Radon can creep into your home through cracks in the lowest level of the property. There is plenty of radon present in the air outdoors, and we all inhale a small amount each day. The problem arises when too much radon accumulates indoors because of the lack of ventilation. It can no longer be diluted by the fresh air outdoors and reaches higher concentrations in the air than would otherwise occur in nature.

In about one out of every 15 houses across every state, radon levels are above the recommended safe radon levels of 4.0 picoCuries per liter or less. Although some areas of the country are in areas considered “radon zones,” the reality is that levels can vary greatly from house to house, street by street, or city by city. The only way to know for sure whether or not your home is at risk for high radon levels is by thorough, accurate testing. 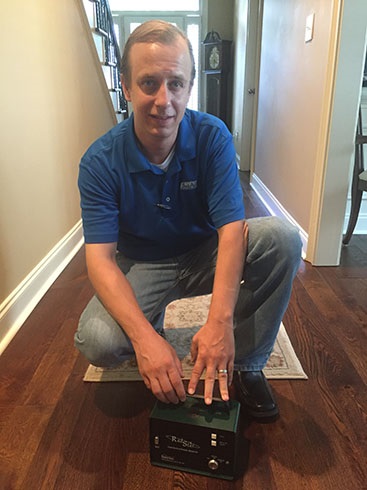 What Effects Can Radon Have on Your Health?

Radon is one of the leading causes of lung cancer deaths in the United States, second only to cigarette smoke. Unlike cigarette smoke, radon is a silent and invisible killer. You would never be able to tell that you were being exposed to prolonged radon because it is virtually invisible and undetectable to human senses. As radon enters your system, whether through inhalation or in some cases through the water you drink, it gradually causes physical and chemical damage to the fragile cells found inside your lungs. Each molecule of radon can latch itself onto the lungs, and then continue decaying and giving off radiation.

The longer the exposure to radon, the greater the risk. That is why it is so important to test a home when you first move into it, and at regular intervals as long as you are there. Scientists have shown through studies that the length of time one is exposed to radon has been significantly linked to the likelihood of developing cancer. Strong links are clear between radon and lung cancer specifically, but ongoing research is being conducted on other possible side effects of exposure. New evidence shows a possible correlation between radon and leukemia.

Because of the known health hazards of radon exposure, it is also important to test for radon levels before selling your home. Many potential buyers are well aware of the risks and want to be sure the home they are moving into is safe. If high levels of radon are found before putting your home on the market, you will need to take steps to rectify the situation before your home is considered by buyers.

When it comes to your safety and the safety of your family, you want only the most accurate and reliable radon testing. At SafeAir Radon Testing we use testing equipment that is the top of the industry. We will work with you to provide your results as quickly as possible—we know that the results of your radon testing matter, and that they determine your next course of action. If radon is found, there are a range of affordable and minimally invasive solutions that can restore the quality of air in your home. Sealing visible cracks is the first and simplest step to preventing excess radon entering the home, but is generally not enough. As the next step, “sub-slab depressurization,” or removing the noxious has from the slab beneath the home can be performed by a third-party radon mitigation contractor. This suction removes the contaminated air from beneath the home through a vent and releases it into the air far enough away from the home that it is no longer a danger.

Don’t let more time pass without knowing what radon levels are in your home—every day you wait is another day not knowing if you are exposing yourself and your family to dangerous carcinogens. Call SafeAir today to schedule your professional radon testing and inspection. Our tests are quick, efficient, and affordable, and will help you make the decisions you need to keep your home environment safe. If you’re in need of SafeAir Radon Testing in John’s Creek GA Call Us Today!